My wife often says people tend to either favor sweet or savory foods.  This may be true for many twenty-first century Americans. However, while today many of us are obsessed with food (is it locally grown, organic, gluten-free, vegan, etc.) sailors in the Age of Sail rarely had the opportunity to choose between eating sweet or savory foods.  More to the point, their diets rarely varied and sailors had little say regarding the food they ate.

What was an 18th seamen’s diet like? A quick look at Royal Navy (“RN”) victualling regulations provides a sense of the food sailors ate. The regulations required the following foods be served to naval crews on a weekly basis:

This diet remained largely unchanged until 1847 when the Navy began to utilize canning. Seamen on 18th century American whaling vessels were served a similarly unappetizing selection of food with corn and beans occasionally providing some variety to their meals.

A couple of observations about a sailor’s diet in the 18th century: 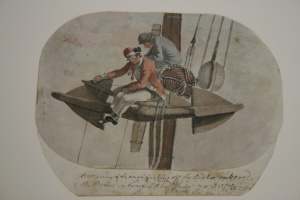 However, McLean’s illustration does neatly capture the centrality of food to seamen’s shipboard lives.

So this raises the question, could you survive on the diet of an 18th century sailor?  Hint, colorful salads such as the one depicted below, which my friend Diane and I recently shared, would NOT be what 18th century ship cooks provided to crews.

After my next posting on turtles and turtle soup I’ll post  a poll regarding food choices for seamen. Spend few moments to answer it and I’ll discuss the poll results in a later blog.