The Charles W. Morgan forecastle On Thursday October 4, 1764 a South Carolinian slave named Saundy ran away.  His flight by itself was hardly remarkable; in the eighteenth century hundreds of enslaved individuals in British North America, the West Indies, Central and South America fled their masters. This six-foot tall African-born man walked “very upright.” Saundy was believed likely to seek a berth on a ship causing his master to place an advertisement warning ship masters not to “carry off the said fellow.” During the 18th century black men such as Saundy could be found hauling lines and at the helms of Boston coasters, New London pinnaces, New Jersey oyster boats, New York ferries, Carolinian shallops, Bermudian blue sea sloops, Jamaican droghers, as well as a variety of other vessels in the Western Atlantic. Considerable numbers of blacks, such as the Philadelphia dockyard worker depicted below, outfitted, loaded and unloaded these vessels. For example, Jingo Negro, Quam and Newport were but three of the more than 125 black men employed by a single Rhode Island merchant to prepare his ships for sea between 1760 and 1782. In sum, Saundy would not have appeared out of place when on dockside seeking a possible berth.

Maritime work experiences, along with the use of sailors’ clothing, often enabled runaways to convince ship masters to hire them, particularly during wars when seamen were in great demand.  As the historian Jeffrey Bolster has noted, ship captains often hired with ‘more of an eye to muscle than complexion’. But in coming aboard what type of life did Saundy and other fugitives find? This is a complicated question for in seeking freedom through maritime employment these runaways choose a regimented and highly controlled environment. In this post I’d like to address one aspect of this question: how did Saundy and other tall black men fit — physically and socially — into the tight cramped spaces of 18th century ships?

Why the focus on tall black men at sea?  Simply stated, they represent certain tensions in the 18th century maritime environment. On one hand tall slaves were highly valued. Slave traders often choose taller men “to increase their profits” and advertisements stressed that men to be sold were tall and strong. Ship captains also valued tall men’s strength and endurance. In 1762 Pompey, Harry, Sam and Prince each fled their New York masters. All were 6′ or taller and “used to the sea” and/or wearing sailors clothes. Each was believed likely to have been hired aboard a ship in New York harbor. Yet while they may have been highly valued Pompey and other tall men’s very size shaped their lives at sea as well as social relations on ships in distinct ways.  Not only did these men need to fit within very confined spaces, but their size and maritime skills also represented a challenge to many whites’ expectation of blacks’ place in society. And life in confined space at sea raised negative associations  for black seamen. Thus for tall blacks life on 18th century ships provided unique challenges. Lets consider the tensions that tall black seamen represent by first focusing on the confined nature of space in sailing ships. To go below deck on whaling ship The Charles W. Morgan one descends a very steep set of stairs.  Although I am 5′ 8 1/2″ I found myself ducking to avoid bumping my head. The first time I did so I thought of my 6′ 9″ colleague Newton Key. How torturous it would have been for him to descend those steps! The image of him attempting to do so provided a vivid image of how uncomfortable life below deck could be for tall men.  In the hold one needs to regularly hunch-over as beams provide less than 5′ 6″ clearance. The experience is a bit like walking through narrow passageways in caves where one has to duck down every few feet. Undoubtedly tall men on 18th century sailing ships spent a good deal of time crouched over and in some discomfort. Even the best contemporary literary and theatrical representations of life in the Age of Sail do not capture the hunched-over nature of life below deck. The recent Glyndebourne production of Benjamin Britten’s opera Billy Budd emphasized the claustrophobia of sailing ships by using a three-sided curved set that hemmed in HMS Indomitable‘s crew. And yet this moving production does not completely capture the low clearance in the ship’s hold; in the opera’s powerful  scene when the seamen below deck sing to each other, not a single sailor crouches to fit under the ship’s beams. https://www.youtube.com/watch?v=5e1uvPCGsrM 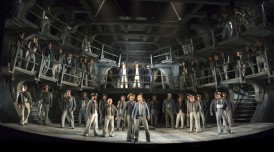 Americans such as Abigail Adams might observe that the confined spaces of sailing ships caused “sickness and fatigue” for passengers. But for blacks the confined spaces in holds of ships had a much darker connotation. For large numbers of 18th century African-Americans their initial connection to the Atlantic was being shackled to others in the hold of slave ships, such as the Brookes depicted below. Subsequently finding themselves in bunks on a whaling ship may have provided maritime fugitives with freedom. But it also represented a existence where once these men again lived in confined quarters and in a system where their movements and actions were under strict control of white men. 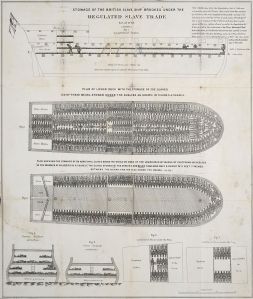 For some maritime fugitives, i.e., slaves who escaped via the sea, life on board 18th century ships would have also reminded them of  the living quarters they had fled. Slaves in North American cities often slept in attics, garrets or small spaces behind kitchens.  While not quite as small as ship bunks they also were cramped and confined places.  Thus, although work at sea may have been the means for maritime fugitives to obtain freedom, forecastles would have had associations for these men of places where they were viewed as having limited humanity and thus provided painful echoes of the men’s enslaved pasts. Once on board tall men would have found sleeping on sailing ships a challenge. Small bunks, such as those on The Charles W. Morgan, provided limited headroom. Despite not being tall I found it hard to fall asleep in the ship. In my bunk a massive ship’s knee loomed over my head creating the sensation of lying in compressed space. Only by turning on my side was I able to not feel confined and fall asleep. Men such as Sambo, Golia, Abel and Fortune, who were not only 6′ tall but were stout men with large feet, would have found getting up into such tight spaces an awkward experience. And once in the bunks sleep would not have been very comfortable. However skilled a black sailor might be race was still often the determinative factor of one’s position on a sailing ship. In the eighteenth century it was unusual for a black to be an ship’s officer, be it on a man-of-war, a merchant ship, a privateer or a fishing vessel in the Anglo-American Atlantic. Despite being valued for their strength and maritime skills all black men found movement up the maritime hierarchy difficult.  Men such as John Jenkins, a free black lieutenant commanding a Royal Navy schooner during the American Revolution, stood out as one of a handful of black sea officers. Thus, while the confined space of a ship’s hold may have caused physical discomfort for tall black seamen, racial attitudes also created a wooden ceiling in the 18th century maritime Anglo-American world that framed and limited black seamen’s opportunities. As the image below shows, blacks were far more likely to be serving officers than being officers. http://collections.rmg.co.uk/collections/objects/127865.html This is not to say that black men were socially ostracized on board ships. Black and white seamen relied upon each other while working. They hauled lines and stood watch together, they were mess mates and shared stories during meals.  But white seamen were known to have “taken a Dislike to [a black] man’s Colour.” Such racial attitudes led some whites to resist being lead by black officers and in some cases to violence against black sailors. In the western Atlantic, in which blacks could be found enslaved in most ports and free blacks had limited rights, this is hardly surprising. Racial attitudes did not magically change upon men stepping aboard a ship.  For whites who were uncomfortable with blacks working alongside a larger stronger black seamen would have been disconcerning, if not result in outright hostility towards his dark-skinned shipmate. Thus, while obtaining berths may have been how considerable numbers of maritime fugitives found freedom, the wide expanses of the Atlantic rarely resulted in absolute independence for these runaways. In considering how blacks fit within narrow confined maritime spaces my next blog will focus on the role of black cooks.